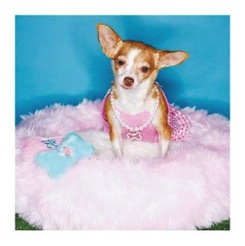 When it comes to looking chic, Blossom is as pretty as they come. Her favorite outfit, a pink-and-white gingham dress, is perfect for going out and looks dashing with her hot pink patent leather collar. Blossom is a brown-and-white Chihuahua who belongs to Lisa Kolp, who adopted her from a rescue organization 1 1/2 years ago. The little dog’s life since has been filled with attention and a stylish wardrobe most people would drool over. She has at least 5 sweaters, a wool coat, a winter coat with a hood, a suede vest and a micro black T-shirt that spells “Princess” in rhinestones. But it’s the pink dress that gets her happily yapping.

“When she has her pink dress on, she starts prancing around and her tail starts wagging so fast,” said Kolp, of Scottsdale, who runs a pet-sitting business called Pick of the Litter Pet Sitting. “You can tell she knows it looks adorable.”

Small-dog breeds already were growing in popularity in the United States, but when celebrities — including Paris Hilton and Britney Spears with their Chihuahuas Tinkerbell, and Bit Bit, respectively — started showing up with their pets tucked in their arms or purses, the designer dog phenomenon took off.

Brands such as Louis Vuitton, Burberry, Coach and Prada are catering to the canine fashion trend with products like Burberry’s reversible plaid doggie trench coat ($225) and a Louis Vuitton pet carrier ($1,500). Target and Old Navy have launched pet accessory lines for the masses.

The American Pet Products Manufacturers Association estimates that $36 billion will be spent on pets this year, and high-end products are the fastest-growing segment.

A few months ago, pop princess Spears stopped by the store to outfit Bit Bit with some of the hottest handmade dresses and carrying bags.

“Bling is definitely in right now for dogs,” co-owner Vince Anginoli said. In the middle of the store, a large basket of plush toys includes a purse-shaped one that reads “Chewy Vuitton” and a perfume bottle with “Chewnel” scrawled across the fabric.

Trendy excess? Some think the pet as accessory has gone too far.

Last month, it was reported that Hilton had replaced Tinkerbell with a smaller Chihuahua named Bambi, because Tinkerbell “grew too big.”

Many owners, including Kolp, are outraged that someone would buy a pet because it’s fashionable.

“Dogs are not purses or scarves, they are living, breathing animals,” said Shirley Banderet, western region vice president of the Chihuahua Club of America. “Our society is so focused on instant gratification, and everything is disposable. It’s really a shame.”

Although many consider the pint-size dogs “teacups,” the Chihuahua Club of America’s Web site states that there is no such thing. The group’s site explains that such adjectives (teacup, pocket size, miniature) have been misused to increase the monetary value of an animal, and that legitimate breeders would not categorize a Chihuahua by size. In fact, Banderet said, if a Chihuahua weighs only 2 or 3 pounds it may face health problems such as fragile bones or disorders related to dwarfism.

Kolp, Blossom’s owner, said she regards proper care as her dog’s most important need. Even though she spoils her rotten. In addition to stylish threads, Blossom has two beds — one is velvet with a hood to bury her head for afternoon naps. The other is a bubblegum pink with soft interior.

“Some might think it’s a little ridiculous, but Blossom is such a huge part of my life and I wouldn’t put anything on her that was tight or uncomfortable. She certainly deserves all of the attention she gets.”